George is a poor boy who lives in a farm with his mom his dad and his horrible and wicked grandma.

One day Mr. Kranky and Mrs. Kranky go shopping to a nearby village and George has to stay in the farm with his horrible grandma.

The grandma begins to insult George and that is when the boy is starts to come up with ideas about how to give his disgusting grandmother a great lesson.

At the end, he decides to make a marvellous medicine with all the products of the house.

All the story happens in the farm of the Kranky family but the book doesn’t say exactly the moment.

I think it is a fantasy book like most of these author´s works.

The main characters are:

George, the creator of the marvelous medicine

Mr. Kranky, he is obsessed about giving the medicine to all the animals on the farm so they become giant and then he can sell their meat.

Mrs. Kranky, she has not done anything in the story.

I liked it because it is especially fun but my favorite part, by far, has been this:

“…as soon as the crane had lowered her to the ground, she ran over to George huge pony and jumped on to his back. This ancient all hag, who was now a stall as a house, then galloped over the farm on the gigantic pony, jumping over trees and sheds and shouting: “out of my way! Clear the decks! Stand back all you miserable midgets or I’ll trample you to death!” and other silly things like that.

It is my favorite part because is the most funny scene that appears in the book.

I will recommend this book to Alejandro because he likes Roal Dahl books. 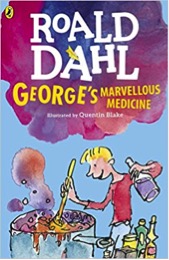