This book is about a boy called Horrid Henry that loves money. But there was a problem, he hasn’t money because he was a small boy.

One day, he decided to sell old stuff that he doesn’t want like old toys and comics but also his mum’s perfume, his dad’s tennis racquet and his brother. He sells his brother like a slave.

When his mother realizes what he has done, she said to him that he has to get his brother back.

I like this book because it is very funny like other Horrid Henry books that I had read. 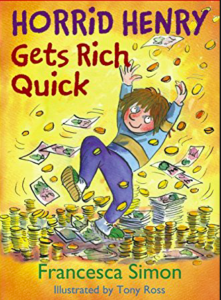