“I kill Giants” is a movie about an 11 years old girl name Barbara who believes not only the giants exist, but that she alone is able to slay them.

It is similar to the 2016’s “A monsters calls” and explorers themes of childhood grief, school bullying and fantastical creatures that pose a threat to the main characters.

In the case of Barbara, she is fighting against the fact that her mother is going to die of cancer. The Giants represent the sickness.

The producers are the same that the ones in “Harry Potter” 3, 4, 5, 6 and 7 (the producer of the first and the second one was Chris Columbus).

If I could talk to the director, Anders Walter, I will ask him if he was inspired from the movie “A monsters calls”. 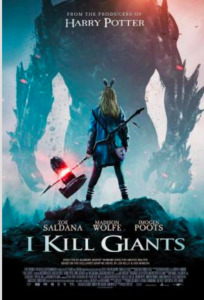